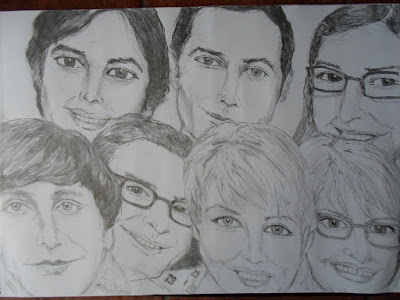 
Well guys!  As you can see I've drawn this well-known series for you all!  Hope you like!  As for myself, well I'm sorry to say that even though I've watched it didn't practical liked it!  As I thought it was like a blooming' rip-off from that well know comedy series called, "Friends!  Remember?  "Friends!  Well that's what I mean! It's just like another version but CRAP!

So, for any that likes this series, I'm truly sorry for if I've upset you-like, okay!

But as you should know The Big Bang Theory is a American sitcom created by Chuck Lorre and Bill Prady both of whom serve as exertive producers on the series along with Steven Molaro..  All three also serve as head writers.
Posted by jsm at 04:36