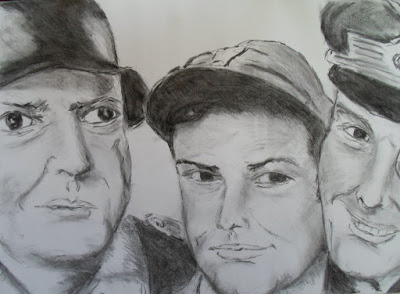 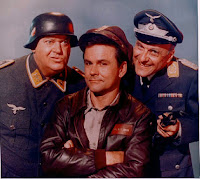 Now, most of you out there may not have seen this very old but was a very funny comedy sitcom at the time, let alone have heard of it, as once my dad had told me this because he had always thought this series was absolutely funny!  Which, after seeing it for myself now, nearly every day on one of the channels on Cable have to agree because nearly every time I sit down to watch it, well I always seem to crack up...  Basically guys, I always seem to end up laughing so much because of how Col Hogan and the rest of the guys like to play up Schulte who most of the time always say and I quote, "I say nothing, nothing, nothing, nothing!!!   Not to mention, "I see NOTHING!

So, with that, I will tell you a little bit about it, okay!

* Hogan's Heroes was an American television sitcom set in German prisoner of War camp during World II.  It ran for 168 episodes , which in my opinion was a shame...  Because even though I'm not really that old enough to remember the series, I have seen it on cable!  And boy! I can tell you while seeing it I like my dad thought this sitcom was absolutely funny!!!  And I truly mean that guys!

* So, anyway, getting back to how long this series really lasted-like... course, this series had first went out on September 17th 1965 to April 4th 1971 on CBS network.

* So, now you guys know a little bit about this comedy series and seen my drawing, well I hope you like!
Posted by jsm at 01:16