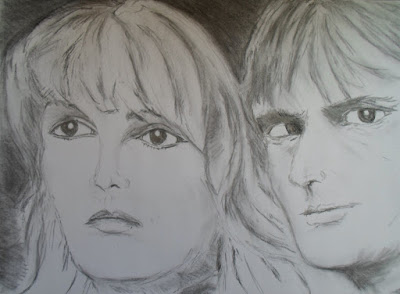 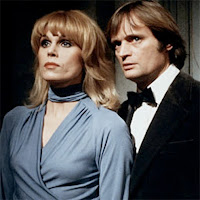 * Now, many of you may not remember this old seventies fiction series - but way in the late 70's this series had appeared on our screens starring the very beautiful Actress, "Joanna Lumley" who played SAPPHIRE...   And once again, the very sexy "David McCallum" who played the part of STEEL!

* Anyway, "Sapphire and Steel" was a British television seventies Si-fi as you already know.   It first episode went out on July 10th 1979 till August 31st 1982, which when they showed their final episode...

* Shame!  Really, course I actually thought that series or Si-fi series as some like to put it was a very good series!

* As it was a operative tasked with protecting the universe from evil forces trying to disrupt the timeline!  It all started as a children's drama.  Do you believe that!  Well, it was, something that was clearly visible in the first adventure, but was quickly transcendent from all of the future.

* Now, when the final definitive  work on science-fiction television was written well the only series that will stand any chance of matching was "The Prisoner" which even though was really another series around that time - well it sort have was, course that series had first went out on September 29th 1967 from 1968, starring Actor, "Patrick McGoohan" as the (known Number six) and was a former government agent who abruptly resigns from his job!!!

* Anyway, let's get back to "SAPPHIRE AND STEE"  course just image if you can and that what if this very well-known Actor "David McCallum" sees what I've said about him!  I mean, calling him "he was very sexy!

And recently guys, after popping into HMV in Redditch Kingfisher Centre I found a Complete box-set of this series of "SAPPHIRE AND STEEL" which first of all took this girl back after watching this old series.

Secondly though, and I've got to be frank guys, is that, that store of HMV now, is so fucking Rubbish!!!  And that's no joke either!  Because, ever since it had re-opened a while ago, films or even old series that you probably would get, being a popular store for getting any DVD's like now, don't have any bloody thing...  So, really why on earth did that bloody Store come back if every time I ask for something they don't have!!!  I tell you all guys, instead of HMV they really should have brought back BLOCKBUSTERS cos, at least when it was around that many years ago, we can definitely get what you ask for then, "I'm sorry, but we haven't got it!  Like what HMV does!
Posted by jsm at 01:43