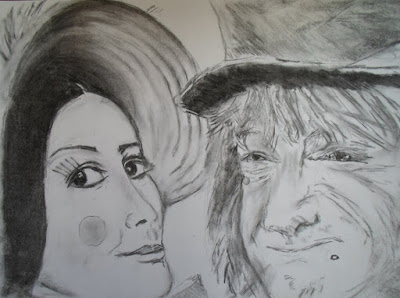 
Now, viewers out there!   You may not have heard of this very old sitcom - has it depends really of how old you are, now doesn't it!!!  Me!  Who's a fucking idiot for asking...  Because, if there's a lot of you guys out there that's in their twenty's or early thirties possibly, surly can't recall this old Comedy!  So, again, what a fucking DICK-HEAD I am!!!

Anyway, getting back to this comedy sitcom that like the title was called "WORZEL GUMMIDGE" course, it starred the late great "Jon Pertree" and the fabulous Actress, "Una Stubbs"  that appeared in so many like Jon had!

Course, even though, this was a children's sitcom at firs,t produced by Southern Television for ITV and based on books by Barbara Eurhan Todd  the programme itself, ran for four series in UK until 1981  So, it went out on February 25th 1871 till December 12th that year!

And as you can see from the photo I've drawn, the Actor, "Jon Pertree" had starred as Worzel Gummidge who was a scarecrow that ever now and again, if I can recall or remember, shall I say had always used to come to life.  As for the Actress, "Una Stubbs" well she played Aunt Sally for who was a life-like size fairground doll...   But which, Worzel had a femme fetale for her!

Which, if I can remember, had always thought you poor Worzel!  As she always acted so NASTY towards him...  Which, okay!  At times, didn't blame he,r because, come on you guys, this is WORZEL I'm telling you about!  Not some fucking HOT STUD - which would probably make us girls look and say to ourselves, "Cor!  Or "Oh boy!  Or even "Hello!!!  If you get my drift!!!  But come on being really fucking NASTY or MEAN wasn't nice!