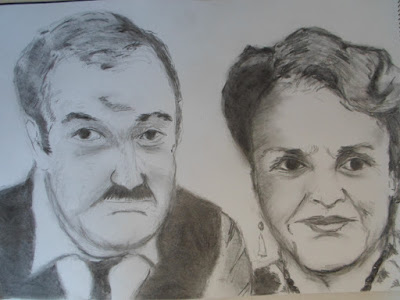 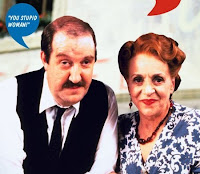 
Well guys, first of all I hope you like what I've done? As you can see, I've drawn a picture of Rene with his oh-so very lovely and beautiful wife, Edith from the British Sitcom 'Allo 'Allo!! But guys come on Edith sure isn't what I just said! Course, if anyone of you out there really does think that... Well guys! All I've got to say to you is, "YOU MUST BE All BLOODY BLIND as a BAT!!! I mean. come on how can anyone possibly say that Edith is - one hell of a Babe... In other words, Cor! Isn't Rene's wife Edith from 'Allo 'Allo! Is GORGEOUS then the rest of them that's in the well-known Comedy sitcom, hey?

For if you guys want to know when this comedy series had first started if you don't already know that is... Well the first ever episode that was broadcast, was actually broadcast on BBC 1 from 1982 to 1992. But if you want to know the actual date that the fist ever episode had went out, well it was on - December 30th 1982. And although, they did eighty-five episodes, which if you think about it is one hell of a lot of episodes!

The story as you gathered is based in a small Cafe owned by Rene, who's wife "Edith" is most Ugliest thing you ever saw, course, really that's what she is, compared to the others! And as for her SINGING, well my god! If I was around, let's say and someone had a GOB-STOPPER then, I would probably tell them to put the fucking thing in her gob to SHUT her UP! Course her voice is really like a awful broken-record that you just can't stand of hearing any longer, if you know what I'm trying to say...

Some would even probably describe her voice as a blooming CAT that's in pain, but course I adore cats, well there's no comparison to her awful VOICE and a moggie! Just no way!

Anyway, the thing I always liked was whenever I see our loveable Rene played by a well-known Actor as you know called, "Gorden Kaye" hanging around a very young beautiful waitress, "Yvette" behind the bar but then suddenly sees Edith pops up from no where and says something to him, then hearing him say, "YOU STUPID WOMAN! Which if you had liked this well-known comedy series knows already that was what he had normally say when Edith catches him with any of those waiters that was around.

Now even though what I told you about this comedy series what I didn't tell you is that both Rene and Edith wasn't my favourite Characters when it was on that is, for my favourite Character in that series had got to be that blooming Police Office Crabtree because as you know whenever he tried to say something it wouldn't like you can really UNDERSTAND him as his speech had ALWAYS, always came out like - "Good morning," then Good Morning! or "I was pissing by the door when I heard two shats," then once again, of what he was trying to say!
Posted by dazzlepops68@gmail.com at 06:01