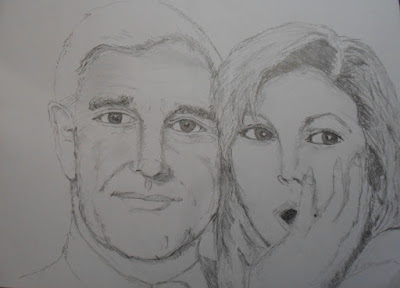 
Hi yeah viewers! So, what do you make of this picture that I've drawn of the late great "Leslie Nelisen" and the beautiful Actress, "Priscela Presley" who as you know was married to the late great "Elvis" himself? Alright! Well I sure hope you all like it... As I did it because of my Neighbour last time I saw them had mentioned "why not draw (so-and so) from that well known Comedy film - The Naked Gun! So, I did!

And so in this film the character that Leslie Nelisen plays, plays "Frank Debin" who was a rather cluesless detective that tries to foil a plot to turn innocent people into ASSASSINS though mind control.

This film was filmed in 1988 when (Police Squad) by "David Zucker" was around of course! And if I can remember from way back then, when I saw Polce Squad, as I some times did, well like the film "O J Simpson was also in that to.

It even though it was in the first film of (Naked Gun) that Leslie Nelisen alias, " Frank" had met the beautiful "Jane" played by Priscela Presley well in some of the sense you see is Frank is saying to Jane is - and I quote, "Jane since I met you I've noticed things that I never knew were there before! But it wasn't until in the second film of Naked Gun that Frank falls in Love with her.

In my opinion, I thought when I noticed it was her that is - being who she is, wife of "Elvis Presley" King of Rock & Rock "Priscela Preley" had played that part so brilliantly! So, well done!
Posted by dazzlepops68@gmail.com at 09:20