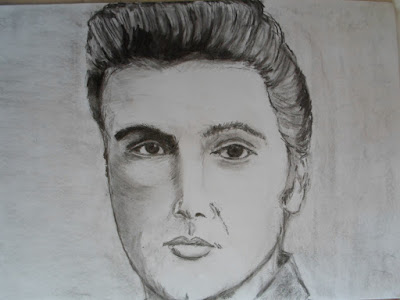 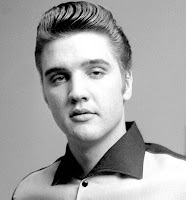 
Now, as you can see guys, I've drawn a Portrait of "Elvis Presley" the King of Rock & Roll! But I didn't do it because there's loads of Elvis Fans out there! "No! For do you guys fucking know why, oh why I I drawn this portrait of Elvis hey? Well it's simply because this drawing that I've done is really dedicated to a young chap that works in Costa's that is in the Redditch Town Centre closest to Boots and Barclay's Bank.

His name is James, James as in (Baby Brown Eyes) well actually that's just me, trying to have a sense of humour with you all, as you should know already. But guys, he does have Brown Eyes, even though what I just said James, Baby Brown Eyes...

Course, hopefully I just want to see his reaction on his face when I simply say "I've got YOU! When he eventually sees this! Ha! De! Ha! Ha James! As well as what the rest of his Colleagues would think when they also see what I've done for him! But if you don't know him already, well you can't MISS him cos, the other main two guys that's normally works there are tall.

But guys, there is also another blooming good reason of why I've probably drawn it and that is even though like many of you that adore or simply admire The King, well that fool as he is, but in a nicest possible way, probably do believe he is fucking "Elvis Presley" himself!!!

Course, once, as this girl was heading around the corner to Costa's as usual, I simply heard our James say to one of the others then, "Aha! "Aha! Like he was fucking Elvis

So, Jamie boy! Hope you like? Cos, once again, I've just got to say I've got YOU!!! Ha! Ha! Ha! Ha! And boy! You can't get your own back on ME! Not unless you've got Lukie, hiudden away to say he's here Sandy! As I'm indestructible!

Now, after giving this picture of Elvis Presley that I've done especially for this young chap, James (Baby Brown Eyes) at Costa in the Redditch Town Centre well let me tell you all that the guy himself had decided shortly after I gave the picture to him, to have his hair cut just like how Elvis has in that very same picture!

Only, boy! Does he look far, far better then the Elvis himself...  And James, if you are looking at this again, or any of you out there that might also come across this again, well that's the truth, you sure do James!!!