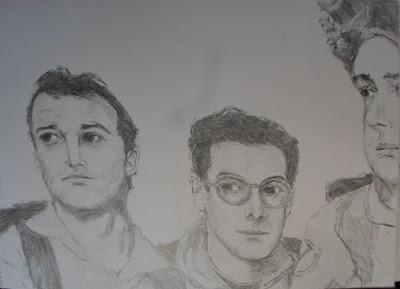 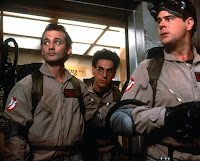 
Now, guys! Surely you must have heard this well-known film of "Ghostbusters? Hey! Course, if not, well you must be on planet of your own, where (Aliens) come from!!! "GREY actually, not GREEN! As the character of Fox Mulder who was played by Actor, "David Duchovny" from that well-known series, that just not long had come back called, "The X-Files" which, I really had liked back then when it started, as well as now!

But, that's if only, ANY - and I do mean if any of you are just completely bloody STUPID, let alone so THICK in their heads to really believe that there are really UFO's out there and Aliens!

Anyway, getting back to that well-known film that first came out in the mid-80's, which I know for a fact guys, that was when it had came out course, that was just one of the films besides "The Commitments" that I went to see in the old Cinema when I was seventeen years of age!

And as you gathered this well-known film was all about these three guys that turned out to be four if you can include Winston that had joined them in the end to get rid of all type of GHOSTS!

But, what I like to add before continuing is that the drawing that you see of the "Ghostbusters" is that how my Neighbour had really took it before helping me put it on my Web-site, if you know what I mean guys... Because, Pete in the film, who is played by the talented Actor, "Bill Murray" isn't like that - slanted! For I've actually drawn it as I always drawn people's faces, which is NORMAL!!! So, viewers out there, please oh please don't think that's how I've actually drawn Peter Venkman, it was just how he had looked-like by slightly turning his head around! 'Okay!

Now, what I've got to tell yeah all is that way, way back then when I was seventeen, and saw that film my first thoughts was that how I thought Peter, "Bill Murray" was maybe cute... In other words viewers, I think way back then, I had a little crush on him! So, by all means guys, think as you wish of ME? As I do now, I was definitely fucking Coo-coo alright, then for thinking he was Cor! Isn't Peter good-looking!!!

Only, just imagine you guys, out there once again, of what that funny and well-known Actor, "Bill Murray" must think if he, maybe one day who-knows will come across this blooming Web-site of mine? Hey! As he may probably think I was CRAZY or just plain DRAFT (as a fucking fruit-cake) or as Nutty, as a BAT!!! Course, I just can't imagine that I've got good taste for thinking he was one hell of a Hunk way back then...

Course, remember guys! Surely everyone and I do mean, absolutely blooming EVERYONE goes through these phrase, when they were younger like I had! And yes, guys! I do mean maybe thinking that they could have fancied someone that they had once thought as a teenager or early twenties "shall I say!