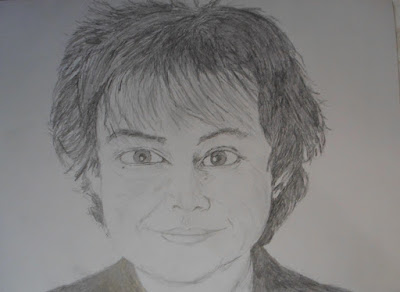 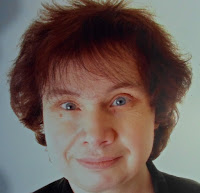 
Well viewers, out there now you know who's been drawing all these Art work that you've not only seen, but hopefully had liked! And if you wanna know something this portrait of myself was dare to myself by the way, because in the past every blooming time I had tried to draw myself, something would always go horribly wrong! And that's NO fucking joke either!

Even that blooming photo you see of me underneath my drawing of myself... Had gone to a camera shop, then thinking to myself why not just go into a photo-booth Sandy? Like I use to always do so many, many years ago, to take a photo of myself so I can simply draw by it!

Because, looking into any mirror at yourself may be easy to some, but I can tell you it isn't so EASY, because of moving every time you want to either look at yourself and then look down to draw! Think about it? As it would be a bit HARD to just draw yourself if you were to only look at yourself in any mirror then simply go to a a photo-booth or a camera shop.

But, if you really wanna know the reason of why, I've stop in going into a photo-booth to take a picture of me id that... And don't fucking laugh either, because what I'm about to tell you all is that when I was very young and I do mean YOUNG, this girl had always had constantly loved going into any photo-booths as I said!

But the last time when I had which years ago, once again was that no sooner then I had gone into one certain photo-booth, well the following day when I thought I would go into the same ONE again, there right in front of that (photo-booth) machine said and I quote, OUT OF ORDER!  Which as I have a sense of humour thought to myself with a little laugh, 'bloody hell!  "Don't tell me that I must have fucking broken the machine from just going in yesterday!!!

Which, ever since then, I've never even thought of going into one... Because once again, with a sense of humour of minw thought that's probably trying to tell me I must have been fucking UGLY to take a picture of me! If you see what I getting at!!!

And what else, I'm about to tell you, well first of all I just can't believe I am!!! Because, there was this one time this so-call Crazy-chick while still at College loved her hero, Robson Green... And I know what you guys out there must be thinking of that, for you may think what a sad PERSON you are or were shall I say! I mean, for myself back then, for thinking "Robson Green" who I really thought has my hero, was a complete Darl!

* Secondly. while I had admired him so much then, which I know you guys are going to bloody laugh at this, because as I was completely crazy over him, well around then, while Robson and fellow mate Jerome Flynn had their very own Fan-Club - well Muggings here, had went to the Redditch Post-Office to renew her form like other Fan-Clubs Fans, if they wanted to continue to be in the Fan-Club...

Course, once again, with a sense of humour like my dad was, I always say to myself as well as others to be frank, "my god! "Why, am I always scaring the guys away??? Hey! As like I'm taking the piss out of myself that really don't fucking care... Course, I don't think I really care of how I say things, since I see myself as like my dad was, who was a right proper Geordie with a sense of humour alright!

Because can all of you out there just IMAGINE - someone with a talent like mine, that as always been drawing in her entire life that is, had once upon a bloody time through her High School years, at The Abbey High School that one of her Art teachers who acted like a blooming Nut-case had one day rearranged a very nice surprise for both me and a friend...

Which was allowing us both only, to do a Model, a Model which was not only my very first time in drawing Models - but which was when I so wanted to crown that silly idiot of a our Art teacher...

* Because, like I also mention before, after drawing a picture of my Art Teacher who was posing-like outside the Art Department of the Abbey High School, well on that day, it wasn't just a MODEL, but a MODEL of a young woman first wearing a long robe then after we both got ourselves all sorted-like and LOOKED UP well there instead of the woman sitting with her ROBE ON she was actually NAKED!!!

Yes, guys! She was fucking NAKED alright and to both of us at the time well not only that we were so very young ourselves... But, if you can just imagine the look when all we bloody saw was - NUDDIE! NUDDIE - and then, yours truly had ended up drawing an A 1 drawing of (the model) which, as you guys should really know is the biggest size paper you can get...

But in our cases, all that I drawn because of the SHOCK I was in, was her "Titties!!! BIG BOOBIES in other words!!! And only the most biggest BOOBIES ever!

So, this is your "dazzlepops" signing off to her Self-Portrait... "Over and fucking out!