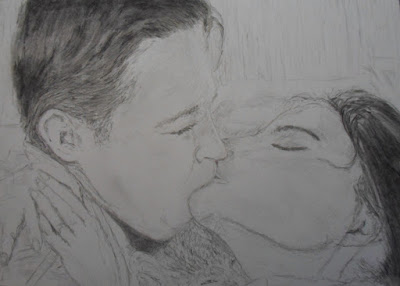 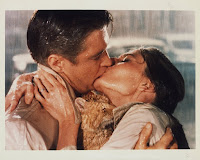 
* Now, first of all guys, don't even think of why I did this sense from the well-known film "Breakfast at Tiffany's." Okay! As I probably did it for two reasons... The first was that while my Neighbour had helped me put on these drawings of mine that I did in the past, well after noticing that I had drawn some pictures that involved kissing they told me that and I quote, "why don't YOU, meaning myself of course, draw some more like that again? Which, as you can see I've done, but also, like it to!!! The other reason was that I dared myself to do it, which really sounds stupid to you, but there you all have it! I dared myself to re-do another ROMANTIC sense from a film, any film but turned out to be this well-known film!

* Which, just before I had started to draw this, didn't know who I was going to draw a involving a KISSING sense like I had drawn some in my past...  Until, that is I thought of this old film that I so loved in my past and maybe still do, being a true hopelessly ROMANTIC as I am, but who unfortunately, for me only loves to really DAY-DREAM!

* Yes guys! Just a Day-Dreamer about - what if I was PRETTY as well as, what would it be like if I meet someone who's really so nice and DECENT, decent as in NOT someone that only thinks of just one thing and that as any baggage's from their past... As I had always dreamt in my past of just meeting someone that's single like myself, without having any kids what so ever!

* Because guys, that's just not me!  Or should I say I think I don't really wanna know them if they had been married! But, what I like is to really day-dream of meeting someone that's SHY like myself - yet, maybe at the same time guys, could only just try to come up to me and speak. * Course, at times I do day-dream of that to!!! That's what I mean how romantic I am!

* Anyway, getting back to this picture that I've drawn of these two late but who was also, very well-known Actors, "George Peppard" and "Audrey Hepburn" that starred in this of "Breakfast at Tiffany's" again, that if anyone didn't know was actually based on a Trumam Capote's Novel. * Which, this story is all about a young woman in New York City who meets a young man who moves into her department building.

* Who at first always sees him with an older woman who is very wealthy, while at the same time, wants to be a writer. As for this young woman well she is working as a expensive essocrt and search for a rich older man.

* Now, even though what I just told you, this young woman is a woman that's in a World War II era of New York who hobslob with famous people but who gets in trouble by breaking their hearts!

* Which, brings me to say that another reason of why I had so loved this oh-so ROMANTIC film was that how Paul Varjak who was played by "George Peppard" had really ended up telling Holly Golightly "Audrey Hepurn" first "You know what's wrong with you Miss Whoever-you are? You're chicken, you're got no guts. You're afraid to stick out your chin and say 'Okay, life's a fact people do fall in love people do belong to each other, because that's the only chance anybodys got for real happiness.

* Then telling Holly - You call yourself a free spirit, a 'wild thing' and you're terrified somebody's gonna stick you in a cage. Well baby, you'll already in a cage. You built it yourself... And it's not bounded in the west by Tulips, Texas or in the east by Somali land. It's wherever you go. Because no matter where you run, you end up running into yourself!!!

* Then and only then which was before you see this sense, you see Paul says 'Here I've been carry this thing around for months I don't want it anymore!

* Which, then you see Holly telling Paul I'm like a cat here, a no-name slobs. Who we belong to nobody and nobody belongs to us... Then adding, we don't even belong to each other! Where then you see Paul suddenly tells Holly 'I love you! But all Holly could answer back was so what? So what? So plenty! Paul says, I love you, you belong to me!

* Which once again before saying anything though, all you could see is Holly is looking-like she's in a tearful way - No People don' belong to people. Where then Paul answers of course they do! Only all Holly would say then was - I'll never let anybody put me in a CAGE!

* Which again, all Paul could tell her is that and I quote, but, I don't want to put you in a cage I want to love YOU.  Which guys, when I first saw this film as well as heard Paul "George Peppard" telling Holly that all he wants is to love her is just thinking Aww!!! That;s so nice.

* But, once again, getting back to what happened after Paul tells Holly but, I don't want to put you in a cage I want to love you is that shortly after you see Doc Golightly who was played by "Buddy Elsen" which if none of you had heard of before, was a very old Actor, that had starred in the old comedy series called "The Beverley Hill-billies! Heatd of it? Well, that was where you would most likely to see him in!

* Anyway, guys! If I can remember from that film, Buddy Elsen character Doc Golightly had really believed that he was still married to her, which could have been all in his mind that he had, confesses to Holly, his love but instead saying Holly's name, he says Lula Mad! Which, then you see Holly telling to Paul this time, a girl can't read that sort of thing without lipstick... And then adding - You know those days when you get the mean red?

* The mean red, you mean like blues as Paul answered her. Where then Holly answers back with the reply, blues are because you're fat and maybe it's been raining too long. Which Paul then says, you're just sad that's all... Which all Holly then said was, the mean reds are horrible. But all Paul then said to her suddenly was, you're afraid and you don't know what you're afraid of! Which, I do believe Holly then said to Paul, do you ever get that feeling? Which then, Paul tells her sure.

* But then, it wasn't until later that Holly says and I quote, "I'll tell you one thing Fred darling... I'll marry you for your money in a minute. Would you marry for money in minute? Which, Paul answers her, "In a minute! Which you see Holly telling Paul "I guess it's pretty lucky neither of us is rich huh?

* Where after that, Paul then says "yeah! Making out I think that he was trying to tell Holly that I'm with you Holly! Which all Holly then said was, "so what?

"So what? So plenty I love you, you belong to me! Which even though after hearing Holly saying to Paul, People don't belong to people, had felt for him even after he replied to Holly, "of course they do! Because all that was going through my mind back then, was that how it was so lovely to hear him say to Holly "how I love you!

* But it was also, how I was probably thinking to myself, being a day-dreamer if only I could meet someone like Paul "George Peppard" that declares they love me...

* As, then and only then, all that I could think of saying was a big Aww!  Because of just dreaming about it through all my entire life-time!

* Which, I like to add, probably just PREFER of Dreaming - what would it really be like if I meet Someone so nicejust de that would just sweep me off my feet by not declaring their love for me again, but to take me in their arms like you see Paul Varjak "George Peppard" in this so very Romantic film, which I really so loved of seeing how it had ended more...

* As that's ME through and through, "an hopelessly ROMANTIC who just loves to DAY-DREAM about what would truly happen if and only if, yours truly could end up like a any girl in a romantic film BY FINDING SOMEONE SO NICE! So, again. here am I dreaming or thinking to myself - Aww!
Posted by dazzlepops68@gmail.com at 09:30