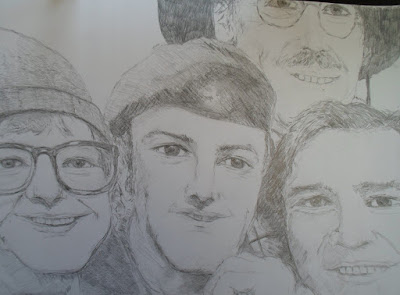 CITZEN SMITH - "POWER TO THE PEOPLE!

First of all to those that can even remember this old sitcom from the late 70's till 1980's, course, I sure hope you all like what you see of our Ken, Wolfie, Speed in the front and just between Wolfie and Speed in the background you can see Tucker!

Ken was played by Actor, "Mike Grady" who stars in - The Last in the Summer Wine!  Wolfie, well if you guys out there don't blooming know WHO had played Wolfie well let me just say YOU'RE THICKOS, YOU!!!  You know, "all that DON'T know this well-known Actor more are fucking MUPPETS!  Or should I put that as YOU are all DICK-HEADS!!!  Yes!  That may sound better then calling YOU all blooming MUPPETS!

And that's no joke either guys!  You are, if you can't really recognise who's Wolfie, that is in the centre of this drawing of mine...  Course, before I continue, this Actor, "Robert Lindsay" had starred in so many Comedy sitcoms such as... "Get Some In!  Then in a Drama series with our lovely, "Julie Walters" called "G.B.H" if I can remember!

As I wasn't really into that series!!!  But I tell you guys something, what I can remember of that so-call series was that our "Robert Lindsay" had played a part called Michael Murray a prologorist, that every now and again his left arm had kept twitching like MAD!  You must know what I mean guys!  As like the poor guy had a very nervous twitch why even his head had seemed to have a little nervous TWITCH when it always happened.

Like, NUG, NUG!  WINK, WINK!  If you guys can all imagine seeing someone doing that?  Hey guys!  Well can you!!!

Unfortunately, G.B.H was only a seven part British television drama not a proper TV series, written and created by Alan Bleasdale - shown in the Summer of 1991.

And then in the sitcom series called "My Family" along with Actress," Zoe Wannamaker" You are all those names that I think that sounds so blooming good for all you idiots out there like there's another - you are all DIP-STICKS you!!!
Posted by jsm at 03:08