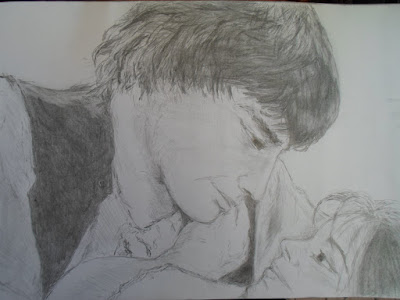 First viewers, this was once upon a time, how I always dreamt of wanting to happen to me...  But, now I'm older I can NOT ever see it happening!  May be I don't, since nowadays guys mock of how I used to dream as well as believe in!!!  That's meeting someone so very NICE, DECENT and they've got to be SHY!  As, I think I still do like that, if a lot of guys, these days has been tired down by marrying someone or which I don't want to ever know is, if they are DIVORCED!  Not forgetting if they've got fucking BAGAGES...   That's bloody kids!!!

Especially, if they got with someone who fucked up their lives by playing a dirty game, by getting pregnant because they may think the guy may like another person!

But, the other reason of why, I actually thought I would like to draw this, was how so romantic seemed.. I mean, come on guys, you just have to look at how Heathcliff is really taking Cathy in his arms!!!

Only, it's a very sad shame I can't ever see anyone for liking me personally in a romantic-situation...  As I'm NOT a Blonde nor pretty!!!  Well, that's just how I really see it now, since once upon time, someone had kept harping on at me that and I quote, "I love only Blondes and pretty ones!!!  Then, turned straight to me with what looked like a stare, as if to say "Well, I wasn't talking about you!  Which, I already knew!!!  "THICKO!!!

* But, anyway guys, getting back to this sexy Heathcliff with Cathy... Because, I just love to image or daydream really of how it would be like if only I was in Cathy's place like the picture I've drawn above...   You know guys, where you see that gorgeous Heathcliff "Timothy Dalton" embraces Cathy like he's ready to kiss her so passionately!!!  But, that I just can never see happening to me!

Never mind, at least I've got a really good imagination or should I say DREAM course, every time I listen to my music on my MP3 player in Town, well I always seemed to drift into a little world of my own even though, it my look I'm busy writing away, I always wonder about what would happen if and only a big IF someone so very nice, but who's got to be slightly shy over me also, to take me unexpectly-like in their arms and kiss me as if it was a surprise!

Because viewers!  And don't laugh if I tell you all, but if that had actually happened to little old ME well that would be my very FIRST KISS!  Course, like I may have already told you all, this Chick as never in her enterer life been kissed, as in "so romantically!!!

* Which was why, I said above, "If someone so very nice, but who would also have to be slightly shy over me and take me unexpectly-wise in their arms and kiss me as in if it was a total Surprise on me!
Posted by jsm at 03:16