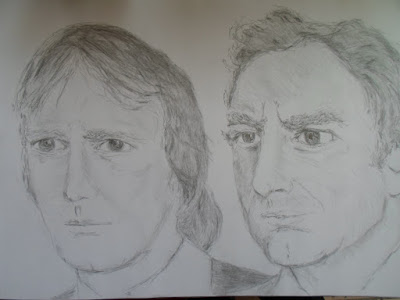 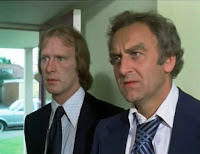 First, I would really like to dedicate this picture of mine to all the families and friends of the late great and much loved Actor, "John Thaw!  Especially, to his beloved wife and actress, "Sheila" who is the daughter to yet another best loved Actor, "Tony Hancock!

Anyway, getting back to this series of  SWEENY because this was a British televisions police drama focusing on two members of the Flying Squad, a branch of the Metropolitan Police Specialising in tacking armed robbery & violent crime in the London area.

And if you guys must know when this so-call popular TV series went out!  Well the first episode had appeared on our screens in January 2nd 1975 until the year, December 28th 1978.

The Actor, "John Thaw" who was so brilliant in whatever part he had played, and that's no mistake had played the part of Jack Regan.  As for Actor, "Dennis Waterman" well he played Detective sergeant George Carter!  As for their Boss,  Detective Chief Frank Haskins - well he was played by an Actor, called "Garfield Morgan!
Posted by jsm at 03:03