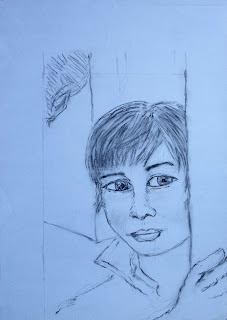 The first time I met him was when I walked into work and even though our eyes didn’t meet, something had told me how was this tall, dark hair, mysterious stranger was going to start something off in my crazy life?  But how!  All I do know was when I had walked into work that day and noticed this guy, leaning against a table with his arms folded looking like he was in a world of his own, while Deek, who was the Manager was at the till.

Who I secretly thought a times, that he looked a bit like that Actor, Ardal O' Halon, when he only played the character of Father Dougal McGuire from that old hit, comedy series of Father Ted, but who was slightly shorter, with brownish hair, showing some pozy, tall, but ever so plain, lanky girl something on the till, while I still couldn't help myself, from noticing that guy, from the corner of my eye, that was learning against that big table, near to the entrance and wondering, oh, he seems really nice to myself.

But saying that, well, only time will tell!  Oh yes!  Only, time will tell, if that guy was going to be nice or not!  As for myself well, being a shy person as I am, wouldn't have thought for one moment then, that anyone like him, would bring my shyness above the surface, like I was when I was must younger.  Because of wondering when I looked at him, he's nice!  But, still who couldn’t seem to bring myself to go up to them, let alone speak to them.

Though, while coming back out from where I had got myself already for my shift, was told by our Deputy Manager, "that we’ve now have two new people starting today," "the one, he replied, "is with Deek, is called Liz, and the other, is Matt."  For whom, must have been him, that I noticed just leaning against that table, with arms still folded and looking slightly down, because as there weren't anyone else around, when I came wondering back out, from our staff-room with Fazz, who was that Deputy Manager, back then!

Only, if you must know seeing him as I did, had told yours truly, not to look at him even after I went up to this new girl Liz, so that I could introduce myself to her, just still couldn’t exactly look up at him.  Not to mention, as I was walking past him so I could make way towards the fitting-rooms, had still told myself not to turn and look at this guy.  But who which, had definitely brought a slight smile upon this girls face for sure while I was hiding myself around the corner of the fitting-room.

As it was only then, that I decided to look at him, because of knowing no one could see me!  Which once again, that was how I met this so-called mysterious, slightly gorgeous and sexy guy, who I had wondered even after knowing he was going to be a member of us, that was he going to start something off in my so-called crazy life?  Because, for one!  It was him that truly brought this girls smile right back upon her face, since her own Manager had got stitch up, right good and proper, by those that was in-change above of the place.  Total Barstards!

Which of course had meant, it was only him, that each time had made me laugh and smile at the same time, but who I didn’t realise had also ended up falling, madly in love with him.  And even though, we did seem to get along like just good friends do, from when he started, had didn't take that long to realise that they were now starting to be a bit funny with me, as in not like, ha-ha!  But, how they were now all seem to be joining in together-like, as like a bunch of flaming idiots to try to make it harder for me for not being a friend with Matt.

Especially, shortly after Fazz had decided to leave us, because of making me wonder that maybe, it was for the best, that me and Matt was not friend’s.  Not because I wanted to!  No!  But, how they truly made it harder for me to continue of trying to be a really good friend with him.  Only, all this as I said, didn’t really happen until, Fazz had decided to leave because what I can vaguely remember was just before he had, well what I noticed was Matt did still showed signs of his funny sense of humour around me.  Which I liked a lot!

Which I've got to admit, was nice to see, as well as, he seemed to act like he really cared of what I thought of him for maybe, wanting to go for Fazzs' job, a Deputy Manager job!   Because, all he kept on saying was, “would you mind so much Sandy, if I went for Fazzs' job?"  Over and over again!

And even though, that was then, and this is now, sixteen years on, since Matt had left our work.  Well, as for myself, it's been really more like fifteen years on, since those feelings of mine for Matt had started to experience.  Because as this was around the time, we all had been made redundant in January 2012.  And I can definitely say that, that experience of my feelings over Matt, as still not changed one bit!

Probably even more so now, then ever before, because what I liked about him in the first place, was how he had first acted all stupid-like, while he was around me, then, it was around the others!  As well as, making me thinking to myself, he could have been slightly shy.  But sadly again for me, at the same time, how he had always singled me out as well as, no matter how he treated me at times, just still couldn’t help myself from liking him even more then ever, because of those times that he really made me laugh, which was really nice for me to see!